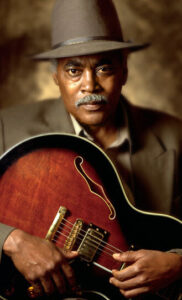 Singer, guitarist and songwriter, Jimmy Burns is a contemporary bluesman, who combines his Delta roots with R&B and soul to create a sound all his own.

Performer with an expressive, soulful voice and a melodic chord guitar style,
Burns has a strong sense of his musical heritage, he has created an upbeat style that has received critical acclaim both at home and abroad.

Born near Dublin, Mississippi in 1943, Burns was fascinated by music from an early age. He loved the sounds that came out of the church and the blues he heard in the streets. Burns sang in church and taught himself to play the guitar while still in the Delta. One of his favorites was Lightnin’ Hopkins.

Burns was performing locally in the 70s and 80s, prioritizing his family obligations. But, with the blues never far from his soul, Burns returned to play full time in the mid-90s. He started with a regular gig at Smokedaddy’s in Chicago, and it wasn’t long before Bob Koester from Delmark Records signs him to record under his label.

Leaving Here Walking was a success from the start, winning Blues Record of the Year from the National Association of Independent Record Distributors (NAIRD), the Big Bill Broonzy Award from the French Academy of jazz and two WC Handy Award Nominations. National and international tours followed, while Burns performed to enthusiastic audiences at clubs and festivals across the country.