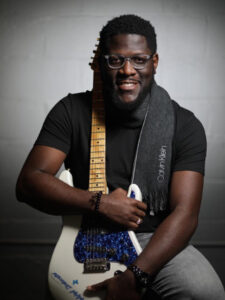 Mr. Jamell Richardson was born in Meridian, Mississippi and grew up in the small town of Butler, Alabama. Jamell’s musical journey began soon after he was born, attending church with his grandmother, who was a pastor. At the age of one, Jamell was already influenced by all the musicians in the church, his grandmother having noticed his interest in music, she decided to buy him his first guitar.

At 11, Jamell was already a session musician, also playing and singing in church. With his inspiration born from this upbringing, Jamell honed his skills backing many gospel quartet groups, ranging from Rance Allen, Paul Beasley, Donnie McClurkin, Marvin Sapp to several well-known gospel groups. Growing up, Jamell began to broaden his horizons by listening to B.B. King, Jimi Hendrix, George Benson, Eric Johnson and many others, which led to his growing interest in other genres, especially the blues. In 2012 he was touring and recording with legendary Southern Soul Bluesman Mel Waiters. It was there that he quickly began to shine as Mel Waiters’ “Young Gun” and “Phenomenal Guitar Player”, capturing every moment he was called upon for his electric solos, he caused a stir on youtube by becoming the attraction of the show.

In the fall of 2013, Jamell’s music career took off, when he got caught up in acting, being cast as guitarist Jimmy Nolen in the movie “Get On Up” (August 1, 2014 – Produced by Mick Jagger and Brian Grazer – Starring, Chadwick Boseman, Dan Aykroyd, Jill Scott, Tika Sumpter, Craig Robinson, Nelsan Ellis) Jamell not only played James Brown’s longtime friend and musician, Jimmy Nolen, but he also worked as a guitar teacher and coach. He has taught everyone from Billboard Top 10 recording artist Aloe Blacc to Keith Robinson (Dream Girls) and a number of other film cast members. To date and during his short career as a musician, he has had the opportunity to share the stage with legends such as Bobby Womack, Lenny Williams, Bobby Bland, Latimore, Al Green, Shirley Brown, Denise LaSalle, Millie Jackson and many more. other blues legends.