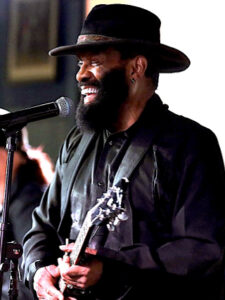 Calvin “Vino” Louden, born in the small town of Hayti, Missouri, traveled to Chicago at an early age with his mother. Back when he was a teenager, Calvin was completely in love with the Blues. After high school, Vino played at many of the blues clubs Chicago had to offer at the time: The High Chaparral, The Grand Ballroom, and The Skyway Lounge to name a few. He performed with various artists such as Roscoe Jackson, Mighty Joe Young and Machine Company which allowed Vino to develop his undeniable stage presence. Shortly after, blues icon and Soulman Otis Clay hired Vino for his first tours playing the blues around the world. At a gig Vino had with Otis at Club Kingston Mines, blues legend Koko Taylor came to see Vino live after seeing footage of him working with Otis Clay. She got to know him and offered him a place in her group. Vino became Koko’s final bandleader and musical director for her “Blues Machine”. Together, Vino and Koko have traveled the world several times for over 18 years.

Since fronting his own band, Vino Louden Band has played venues locally and abroad, including Buddy Guys Legends, Hollywood Bowl, Windy City Live, House of Blues, Chicago Theater, and in Brazil, France, and Japan. He has recorded with Jimmy Johnson, Buddy Guy, Koko Taylor, Otis Clay, Martin Scorsese Film and his own CD Vino Louden Live. Vino also acted as the bandleader of the “the Queen of the Blues” Koko Taylor. Also, he has worked with acts such as John Lee Hooker, B,B, King, Bonnie Raitt, Robert Cray, Led Zeppelin, Jim Belushi and the Blues Brothers. Vino is currently preparing an acoustic/electric project.