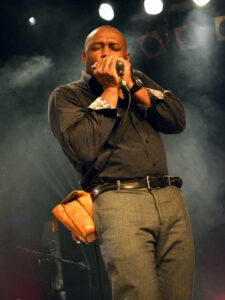 Singer-harmonicist Russ Green’s journey through the blues is different from that of most musicians. Russ was born in Chicago and raised in the western part of the city. Although throughout his life he listened to all types of music, his desire to perform was not realized until adulthood.

After serving in the US Army, Russ attended Southern Illinois University in Carbondale where he studied movies. It was at this time that his desire to play music began to grow.

Like many Jimi Hendrix fans, Russ wanted to be able to recreate the sounds of the Artist he had admired for many years. But being a student and not being able to buy a guitar, he used the harmonica bought a few years earlier… The reproduction of Hendrix’s sounds was achieved, not with a guitar, but with a harmonica!

Russ’ career continued to grow upon his return to Chicago. Not only was he heavily influenced by Sugar Blue, but also by Chicago’s other living legendary harmonica player, Billy Branch. He playfully describes his relationship with his two mentors as two little devils standing on each shoulder whispering in his ear how he should play.

Russ has played, recorded and toured with John Primer and Lurrie Bell. He also participated in the production of CDs for Big Llou Johnson of B.B King’s Bluesville on Sirius/XM satellite radio. This CD won a Blues Music Award for Best New Artist. Green is also one of the harmonica players featured on a CD that has received great reviews and has been played on radio stations around the world, the Chicago Blues Harmonica Project. This recording validated the proof that the harmonica is still alive and vibrant in Chicago.