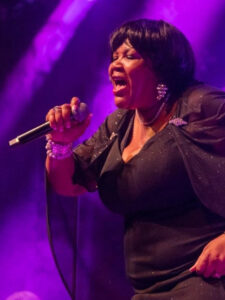 “Nora sounds like me when I was her age. She is one of the new upcoming women who sings the real blues. I know she will get there.” Koko Taylor

Nora Jean Wallace is a Chicago Blues singer with deep Delta roots. Like so many blues greats from the Mississippi Delta, Nora Jean Wallace was born there and raised in a family of Blues and Gospel musicians. Her career started in Chicago in 1976, when she joined the group Scottie & The Oasis, performing with them for several years. Then, Nora continued to refine her art in the clubs of Chicago, in contact with Mary Lane and Joe Barr.

Nora had a big breakthrough in 1985 when Jimmy Dawkins saw her perform at a club and invited her to join his band. Seven years of touring and recording with Jimmy followed.

Nora has perfected her performing skills and gained many fans, appearing at major festivals including the King Biscuit Blues Festival in Helena, AK, Chicago Blues Festival, Pocono Blues Festival, European Blues Cruise and most recently Blues Heaven in Denmark. Her powerful and moving voice, as well as her charisma on stage, captures her audience.