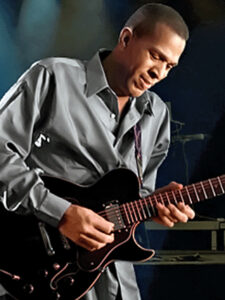 Melvin Taylor is one of the greatest guitarists in rock, blues and jazz history. He is often referred to as the guitarists’ guitarist. This self-taught master was influenced by many pioneers in guitar history, including Albert King, Jimmy Reed, Wes Montgomery and Jimi Hendrix. He appeared on the same post with Stevie Ray Vaughan, Carlos Santana, George Benson, Buddy Guy and BB King.

Melvin is a prolific composer, producer and recording artist, in addition to being a seasoned live performer who has entertained audiences around the world with his virtuoso guitar style and jaw-dropping solos. His love of music shines through many genres, blending smooth jazz, blues, rock and soul, which create his unique sound, which is his.

Melvin continues to spin, delight and entertain audiences around the world.

“One of the most exhilarating blues guitarists to emerge in the past decade, Melvin is considered an innovator in the blues genre, more than a purist, blending jazz chords and rock influences into his tapestry. electric blues. » Rolling Stone Magazine