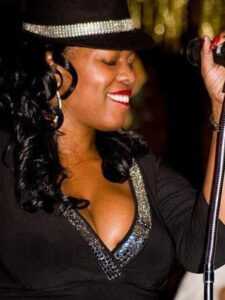 Stacy was dubbed the Queen of DC Blues by her musical peers in Washington DC when she decided to delve deep into the blues genre. Stacy works very hard to maintain this qualification. Washington DC isn’t known as a blues city, but ask anyone in Chicago, Memphis, Atlanta and Europe when you come to DC you have to see Stacy Brooks.

Stacy Brooks Band has won several awards in the USA, including the DC Blues Battle of the Bands and participated in the 30th Annual International Blues Challenge in Memphis, in January 2014.
Stacy started singing at a very young age. At the age of 5 in Zweibruken, Germany at an army show and after her first standing ovation, there was no turning back!

From clubs, festivals and musical performances (The Ghost of the Blues), Stacy’s diverse experience allows her to deliver a show that crosses all barriers. In her quest for the blues, she worked tirelessly to bridge the age gap on the blues circuit and import fans of other genres.